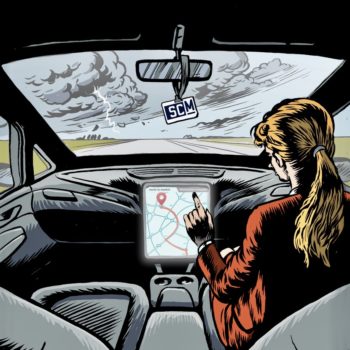 A future in which supply chains are ‘self-driving’ is closer than many people think, and the coronavirus pandemic has brought that future even closer. That was the key conclusion from a webinar organized by Supply Chain Movement in conjunction with Aera Technology. Author Sean Culey stated: “People don’t forecast accurately enough, don’t analyse quickly enough and don’t plan frequently enough. If we want to achieve real-time planning, we will have to make use of machines. They’re better than we are.”

The disruption caused by the coronavirus pandemic differs from all previous cases of disruption. Whereas they almost exclusively affected the supply side, the coronavirus outbreak has also completely disrupted the demand side of many supply chains. “Our studies of over a hundred manufacturing companies in Europe not only confirm this, but also reveal that the crisis has increased companies’ interest in investing in software – particularly in risk management and supply chain visibility software. The coronavirus crisis is acting as a catalyst for the current transition,” said Martijn Lofvers, chief trendwatcher at Supply Chain Media.

Lofvers’ statement was affirmed by Sean Culey, author of the book called Transition Point. In his book, the British academic and researcher describes how there have been five waves of creation and destruction since the invention of the steam engine. We are now nearing the end of the fifth wave – of computers and the internet – and are on the brink of the sixth wave: the start of the digital age: “We are currently seeing the disappearance of old industries and the emergence of new ones. If you thought that the last few years were disruptive, this is still only the start. We’ve got another decade or so of really disruptive change ahead of us.”

According to Culey, the disruption witnessed during the coronavirus crisis would have happened without the virus too, just not in such a short time frame of a couple of months. “The coronavirus crisis demonstrates that we need to improve the agility, resilience and responsiveness of our supply chains. New technologies such as artificial intelligence, Internet of Things and robots make that possible.” The first wave of automation was initially focused on physical, repetitive production activities. That was followed by the automation of knowledge-driven, office-based tasks. Everything is now coming together and we are on the brink of automation of the end-to-end supply chain. “If that succeeds, that’s when the sixth wave will really take off,” stated Culey.

A fully automated end-to-end supply chain means that the planning is automated too. “We have access to so much data and so many variables that people can no longer make sense out of it all. We don’t forecast accurately enough, we don’t analyse quickly enough and we don’t plan frequently enough. If we want to achieve real-time planning, we will have to make use of machines. They’re better than we are,” he continued.

Gonzalo Benedit, General Manager of Aera Technology in Europe, agreed with Culey’s vision. “The coronavirus crisis has illustrated that we’ve reached the limits of human capacity. Decision-making has to be a lot more frequent, more rapid and more real time. In other words, we need a new way of working – a new approach to decision-making processes.”

Right now, supply chain decisions are still made by people, supported by machines. Aera Technology foresees a future in which the machines themselves make the decisions, guided by people. “Those machines will be the brains and the memory of the company; that’s what we call ‘cognitive automation’,” said Benedit. Aera Technology has developed technology for that including a software layer that continuously gathers and analyses data from underlying systems. Benedit talked about ‘sensing’: “That can be done based on internal and external data. A single purchase of an item in a store can be enough to create a signal. The software generates recommendations based on all those signals, without being hindered by prejudices or restrictions. We then translate those recommendations into concrete actions that can be initiated automatically. That leads to an autonomous, self-driving supply chain.”

Existing processes such as sales & operations planning will remain valuable, added Benedit: “It will always be necessary to align supply and demand, but we need to redesign that process. Why do we keep holding on to the monthly cycle? We need to make decisions in real time rather than just once a month.”

Letting go of the wheel

According to Benedit, a self-driving supply chain is not actually as futuristic as it sounds. Aera Technology starts each project by implementing a software layer that gathers data from underlying systems which is then cleaned using machine learning. “We often need a maximum of six to ten weeks for that. Then we move into the cognitive phase, in which we start to generate recommendations based on the data. In that phase, we can make the ‘brain’ that we implemented in the first phase smarter by using data science, artificial intelligence and machine learning. When that’s working properly, that’s when we can let go of the wheel for certain parts of the operation and keep moving towards a self-driving supply chain.”

But letting go of the wheel requires trust. Can we put our trust in technology that – for many users – is just a black box? “That line of thinking stems from the fifth wave,” explained Culey. “During that wave, people could only rely on a system’s outputs if they understood how the underlying technology worked. But that’s no longer an option in the sixth wave due to the huge volume of data and amount of variables. If the current generation see that a system is delivering accurate outputs, they will automatically grow to trust the technology.”

Aera Technology’s solutions are already helping a number of companies to achieve results. As an example, Benedit mentioned an existing customer that had started its journey towards a self-driving supply chain several years ago – and then the coronavirus crisis struck. “We had already implemented the cognitive data layer. Just ten days later, we had developed a solution based on that layer that enabled the company to simulate the impact of disruptions. What if a particular supplier could no longer deliver? How would that affect the production activities and the customers? That solution meant not only that all the stakeholders had a clear and uniform view of the crisis, but also that the company could make the best use of its limited resources.”

During the webinar, Benedit encouraged other companies to embark on their own journey towards a self-driving supply chain, and to start by analysing their key supply chain challenges. The first improvements become visible within six months of starting the journey, he claimed. And for those who were still not convinced, Culey had a suggestion: “Imagine that you could start afresh. Would you design your business to look the way it currently exists, or would you design it differently? Then take a look at the options that technology offers to optimize the design of your operation.”

Keeping an eye and ear on patients’ needs: Where AI meets Supply Chain