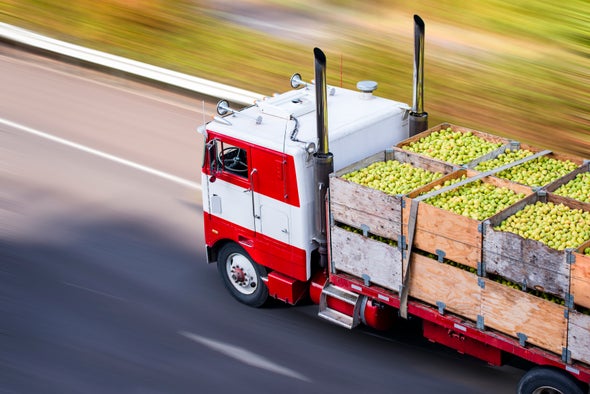 As the coronavirus crisis takes a massive toll on global markets, officials are increasingly raising alarms about the food supply.

Maximo Torero Cullen, chief economist with the U.N.’s Food and Agriculture Organization (FAO), has warned that “a protracted pandemic crisis could quickly put a strain on the food supply chains, a complex web of interactions involving farmers, agricultural inputs, processing plants, shipping, retailers and more. The shipping industry is already reporting slowdowns because of port closures, and logistics hurdles could disrupt the supply chains in coming weeks.”

He emphasized that unlike during the “2007–2008 global food crisis, scarcity is not an issue this time.” The problem is getting that food where it needs to go.

As with any supply chain, the systems that bring food from growers and producers to your table involve global networks that run on data. Everyone from vendors to distributors, warehouses, transporters and more needs to know how demand for various food is changing, how much is being produced, where it’s headed to, when it will arrive, and more.

The amount of disruption under way is difficult to fathom. Some growers and providers face struggles as they find their workforces limited as a consequence of COVID-19. Others have plenty of supply, but transportation networks are more limited, so they end up having to get rid of perfectly good food—even turning fresh vegetables into mulch. And when it comes to packaged foods, some ingredients that usually come in from one country to a factory in another country suddenly aren’t coming through, so factories are scrambling to source ingredients from elsewhere.

Meanwhile, some companies that play major roles in the chain have pivoted at least some of their efforts to help build or transport nonfood items that are desperately needed right now, such as equipment for hospitals and other medical institutions. Take Amazon, for example, where more and more customers were getting their groceries before the pandemic.

There’s also been a shift in what customers are looking for. For example, rather than having preferences over which specific brands they want for certain items, people are ready to accept similar food items of any brand, and in any size. The entire supply chain needs to adjust.

It’s all too much for already stretched staff at many companies to have to handle on a daily basis—particularly with smaller teams due to layoffs and absences.

When cognitive technology is applied to the food supply chain, transactions across the world are tracked live, even as they change. All those data are instantly synthesized so businesses get the information they need and can make live changes as a result.

For example, if a provider is unable to produce its usual supply of milk, another can instantly increase its production, and all other providers can see that information. The same goes for logistics. If trade restrictions, lack of personnel or other factors prevent a transporter from being able to pick up and deliver food, another transporter can know that instantly and pick up that piece of business.

Making this happen requires businesses across the chain to allow their data to be loaded up to a single place in the cloud, where it is processed instantly by what we call cognitive automation. This process also wraps in other information, such as weather forecasts, changes at ports or in transportation routes, and more. (Our company is one of numerous providers of such technology to certain industries.) The automated process sends back key information to everyone in the chain so they get a clear picture of where things stand.

Numerous real-life examples have shown how promising these technologies can be. At Chalmers University of Technology in Sweden, researchers carried out three case studies in the automotive industry, and found “an enormous competitive potential if the companies consider cognitive automation and form a cognitive automation strategy. This becomes more and more important in a world of mass customization and [globalization].”

Johnson & Johnson, one of the companies we have worked with, says such technology can help create a “really wonderful, self-driving, automated system.” It’s not perfect, of course. But through machine learning, over time it reduces error rates and increases efficiency.

Think of it like an orchestra. Some of the people who usually play certain instruments are suddenly unavailable, but there are others standing by who can take their place. Cognitive automation can act like a conductor, getting everyone into place instantly, with the same sheet music, making sure they can play together harmoniously.

The more quickly food suppliers harness the power of cognitive automation, the safer and stronger the future for everyone will be.

Push is on for more artificial intelligence in supply chains

The Future Of Planning: From High-Touch To Touchless